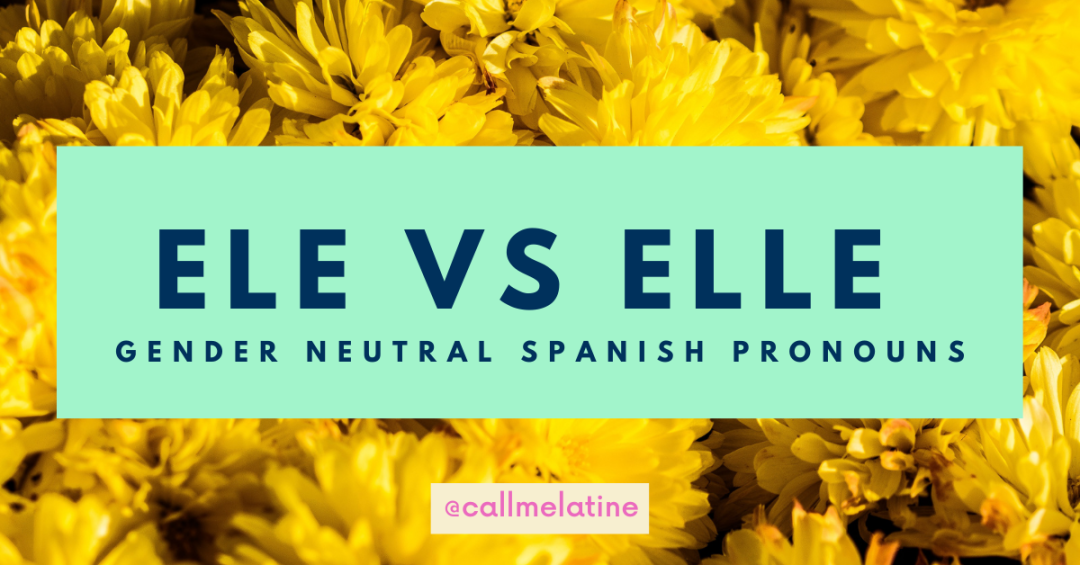 Today we’re looking at the pronouns Ele vs Elle. Ele (pronounced el•eh) and Elle (pronounced eh•yeh) are both gender-neutral pronouns used by advocates in Spanish. However, Ele and Elle have been used by some to directly substitute for El (masc) and Ella (fem). This is problematic because the use of direct replacements continues the emphasis on gender and a difference or distinction between masculine and feminine.

While Elle has become the most commonly used gender-neutral pronoun, at Call me Latine we present both options to our audience because language is evolving and the use of a pronoun is a personal decision. It should be noted however, that at the end of 2020, the Real Academia Española (RAE), the premier academic institution charged with preserving the Spanish language, recognized Elle as an official gender-neutral option.

What do you think? Would you use Elle, Ele, or something else?

Learn more about our resources:

I grew up in the Rio Grande Valley, the most southern region of Texas, in a small town called Brownsville. While I grew up in classrooms full of Garcias, Sanchezes, and Cardenases, my last name was Lee.
Today we take a look at the term Latine and who is and isn’t included in the umbrella term.
This week we pay tribute to Rosie Jimenez of the Rio Grande Valley. Rosie was born and raised in McAllen, Texas in the 1950s. The daughter of migrant farm workers, she grew up in poverty, and was one of twelve children.
Language is constantly evolving, and that’s a good thing. Here we take a look at some alternative options to the terms Latine and Latinx.
What is Femicide? Femicide is the use of violence against cisgender women, trans women, and gender-non conforming queer femmes.
Latine is an identity. Some Latines are deaf and communicate using Sign Language. Some Latines are Brazilian and speak Portuguese. Some Latines can’t speak any Spanish at all, and that’s okay.